‘New massage therapist in town makes one hell of an impression’

Ripped Into the Headline

According to local resident Jon West, the new massage therapist in town is like ‘no other.’

“I’m sure she must be into magic or something because I felt like she’d cast a spell on me and just like that- poof! -my aches and pains were gone. I’ve never felt anything like it”

Of Chinese descent, ‘Marta’ at ‘Relax if you will’ incorporates Eastern techniques into her practice, providing a much needed alternative to western massage methods.

Below is a true recount from one of her still ‘dazed’ customers- and trust me, it has to be read to be believed.

‘She lead me into a room-Exquisitely decorated, exquisitely oriental. Chinese characters in bold whispered their foreign word from all angles-portraits of Eastern Medics and Masters extirpated my breath with their stares…’

“You’ll learn, as you get older, that rules are made to be broken. Be bold enough to live life on your terms, and never, ever apologize for it.Go against the grain, refuse to conform, take the road less traveled instead of the well-beaten path. Laugh in the face of adversity, and leap before you look. Dance as though EVERYBODY is watching. March to the beat of your own drummer. And stubbornly refuse to fit in.”

― Mandy Hale, The Single Woman: Life, Love, and a Dash of Sass

This morning I really felt I was in need of a good massage.

My arms, shoulders, back and neck felt positively tortured, and were responsible for a level of fatigue and discomfort that was beyond my usual tolerance.

It’s amazing how this ‘stiffness’ becomes normal after a while.  I’ll barely notice it until it builds to a pathological level, causing headaches, irritable mood, and lethargy.

Today, in a fortunate stroke of serendipity, I discovered a gem.

I made the spontaneous decision to book in for a massage, however, it was proving to be more difficult than I thought.

“Oh gosh no, but we’ll put you on the waiting list.”

Disheartened, I gave up on the seemingly exquisite idea of being spoilt, as clearly everybody else in this town had the exact same thought. As I made plans to down some paracetamol instead, an interesting ad for a massage therapist caught my eye. I hesitated, believing the response would be the same, but took my chances one last time.

“Oh hello, my name is Nicole, I’m hoping you have a spot for a massage today, but I know you’re probably booked out, so don’t worry, I guess I’ll just have to—”

I hurried my introduction, added in a few deep sighs, and prepared myself for rejection when I was interrupted by a sweet voice simply saying,

Before I could get another word in, the conversation was over.

‘I had never seen a massage place like this one before.’

Her studio lay tucked away behind some old buildings at the top of a flight of stairs. I’d be lying if I said there wasn’t an element of anticipation. I don’t know about you, but booking a massage with someone unknown always concerns me. I have certainly had my fair share of odd massages, in some very odd places.

Like a little child, I pranced to the top of the stairs, and quickly ran down them again, as I panicked and thought I was in the wrong place. A quick scan of the area downstairs revealed nothing, so I stealthily re-climbed the stairs for a second look. Peering carefully around a concrete corner, I saw it-Signage.

Large, hand written, white letters were splayed across her window, much like words on a chalk board aligning a market stall, where vendors sit cross legged, hoping to sell their goods. I imagined it reading-

The strong scent of massage oil and incense began to awaken my senses as I approached the entrance. Instantly, I was on the back foot.

‘Incense and me just don’t go together.’

My stomach churned as asked myself whether I’d made a terrible mistake.

I had never seen a massage place like this one before.

Incense and me just don’t go together. For some reason, I associate it’s odour with Witch doctors, Magic tricks, Ouija boards and Tarot cards-you know, all that spooky stuff-

“wooohooooo I can see her…your dead great aunt in law…she is trying to tell you something…” -that kind of rhetoric.

With no sense of an open mind, I made a judgement that this massage was going to involve a few magic prods here and there, some Abracadabra words, a poof of smoke and

As I entered the shop, there was another customer sitting down in the waiting area. She glanced over at me and nodded her head, but kept quiet. I nodded in return and took a seat.

The reception area was small but neat, the walls adorned with Asian images. As I waited, nervously suspicious, she turned her attention to me, speaking in soft tones.

She gave me the fright of my life as it occurred to me that this person I thought was a client, was actually the therapist.

She was of Chinese descent, elderly, half my height, with a crooked gait, and wise eyes. Her skin as pale as white porcelain, her feet as tiny as a toddler. Her English was exceptionally limited.

I filled out the form, which included the usual questions-injuries, sore points etc, and handed it over to her on completion. She glanced at it for a fleeting moment. As I sat there, in silence, waiting for the next instruction, I felt as though I were lost in time—as if I were no longer in 2015, but on a mission somewhere in Ancient China in 1756. I began to sense that this session was going to be different. I was already feeling the wonder and intrigue.

Strangely, I was keen for more.

She lead me into a room. -Exquisitely decorated, exquisitely oriental. Chinese characters in bold whispered their foreign word from all angles-portraits of Eastern Medics and Masters extirpated my breath with their stares. 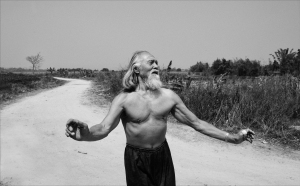 Modesty was left outside as she instructed me to undress. She was not interested in waiting outside for me to do this. I carefully placed myself face down on the massage table. As I did this, I happened to glance upward.

“You know, I might look small, but I am bery bery strong.”

I was completely unsure of what to expect at this moment. What a pleasure. What an invigorating feeling to be faced with a new taste, an unknown entity.

Her hands were powerful. Her technique flawless. I lay there mesmerised, weak under her force. She located every pressure point with ease and accuracy.

I found myself drifting into a semi-trance, as my muscles let go for the first time in years. Every single muscle fibre in my body was re-energised and invigorated.

The soft background tunes took me to the Great sinking Titanic-really? I know bizarre

-and the quiet clunk clunk of the air conditioner sent me direct to a deserted island where tropical fish frollicked in crystal clear water. I lay in a hammock on the beach where I was setting up for a siesta beside the cooling fan.

Completely buried under a stack of hot towels, she began to walk, all over my body.

Ahhhh, so that’s what the roof rack was for.

Her feet kneaded my legs and back with delicate precision. It actually felt amazing until she stood still on top of my lungs for what felt like hours. Death by asphyxiation crossed my mind a few times, but she clearly knew what she was doing—

It was the perfect massage.

The influence Eastern Massage techniques had on her style was refreshing and effective. How fortuitous, to find such a gem, and have such an experience in a day that was not planned as so. My body felt light, relaxed and refreshed.

Going with the familiar, has become habitual for me. I think it’s because it feels safe. Control is my middle name, and it’s so darn restrictive.

Do you do that?

Take the same route home from work everyday? Buy the same food week in, week out at the same grocery store?

I stumbled upon a little bit of magic today. It just goes to show, there is a fascinating world out there just waiting to be explored and experienced, in so many different ways.

What have I learned?

"I have been writing and creating images all my life-though it's only now, that I have finally let in the light" ~N.Martin View All Posts

"I have been writing and creating images all my life-though it's only now, that I have finally let in the light" ~N.Martin